My recent yoga practices have revolved around a very consistent theme these past few weeks.

Boundaries mean different things to different people. Setting a line that you can't cross socially, such as telling someone you don't know at a tram stop that they need to floss, no matter how many visible cavities you can spot from two metres away. Knowing when to tell a friend to stop unloading all their personal problems onto you, because you soak their pain up like a sponge without any hope of squeezing it out later. Just learning to say no.

There are many other boundary situations in life that you could probably think of, ones that are more relevant to you. My own boundary story is this... knowing when to stop. The truth is, I don't think I have an off switch. When I decide to do something, I'll be damned if I don't go through with it, and don't you dare stand in my way. If it's challenging, even better!

All sounds good, until you start physically hurting yourself because you simply don't acknowledge your edge. Or when you start losing every semblance of having a life and forget to look after yourself due to work, relationship, and friendship commitments. I mean, really... when your dentist asks you if you're allright, and that you need to start looking after yourself just based on the condition of mouth splint (I cracked mine in 6 months), you may have a problem.

We have this practice at work of stating weekly commitments, 1-3 per week so that they are achievable. The belief is that stating your commitments make you more accountable. While pondering how I can incorporate more of a focus on setting up these boundaries in my life, I came up with three commitments:
These are my weekly commitments for the month of April and probably May.

Before ending this post, I would like to take some time to spread some love for Fightmaster Yoga. I've been following the 90 day program to re-establish my yoga practice at home, and it's truly amazing. Lesley's free program is better than most of the paid yoga classes in my area, and it brought back so much love for the practice that I had lost when I left SomaChi Yoga. Please subscribe to her Youtube videos, or donate to her very worthy cause of bringing yoga to everyone and anyone.

Till next time spiritual warriors.
Posted by Hui at 6:30 AM 15 comments:

Finding Myself (and maybe Nemo)

It has been a while.

I guess you could call a period of time just under 2 years a while. Time is subjective after all, and to be honest, it only felt like yesterday that I had written my last post.

Sometime between this distant yesterday and today, it has felt like so many things, and yet nothing, has eventuated. If I try very hard to remember, I can recall turbulent times when my body felt its worst, when I was physically and mentally exhausted. There were happy times too, and times when I began doubting every decision I had made in the last 2 years. Was it the right choice to give up music teaching, knowing that I am good at it? Was it prudent to begin a brand new career path in a completely different industry, unsure of my own capabilities?

I guess in the end it doesn't matter, because I am here right now. When I stopped writing, I stopped doing many things. Running, yoga... it was partly because I was busy, partly because I had injured myself from running yet again. Then, the excuses started to build, and once the habits were lost, I couldn't get them back. All the questions I had about myself wouldn't leave so I chose to abandon myself.

I'm not sure when I changed my mind, but it was a thing that just happened. When I was a little girl, I would throw up every single night. No reason... it happened without fail, every night, for a few months. Then, one day, I walked up to my mom and said "Mom, I'm not going to throw up anymore." And I didn't. Ah, the mysteries of the human spirit!

In the same mystic fashion, I suddenly decided that I was going to begin rebuilding other aspects of my life again. I had begun the career that I was gunning for, but other parts of my life were still derelict with neglect. At first, it was a pledge to begin playing in a community orchestra... to honour my original intentions of swapping careers, which I had told myself was so that I could play more. I think I surprised myself when I began pulling through with this promise... I am possibly the laziest violinist I know. Then, began the yoga.

I owe my restored passion for yoga to Gretchen Rubin's book on habits, Better Than Before. When I began reading the book, I began to yoga once more. I remembered how amazing it felt at the end, how serene life is when you bow down at the end. And so, I started an almost-daily habit - wiser, stiffer, and humbler than before.

I believe there is a transition period in everyone's life when you grow from being a young adult into the next phase of adulthood. I think that was what the past couple of years was for me, discovering my edges and most importantly, learning the art of letting go.

Till the next time fellow spiritual warriors, whenever that may be.
Posted by Hui at 5:42 AM 16 comments:

Rosehip oil is all the rage these days. Applied to your skin it is meant to reduce acne, control psoriasis, be an excellent moisturiser among many other things. In fact, ff you peek at the ingredients of your natural skincare, rosehip oil is probably going to be in there, somewhere.

I've had my eye on Tasty's Rosehip Tea for a while, but never took the plunge in trying it. But with all the rosehip hype going around with the oil, I thought... why not?  And so, I popped a box in my shopping basket and took it home for a sampling. 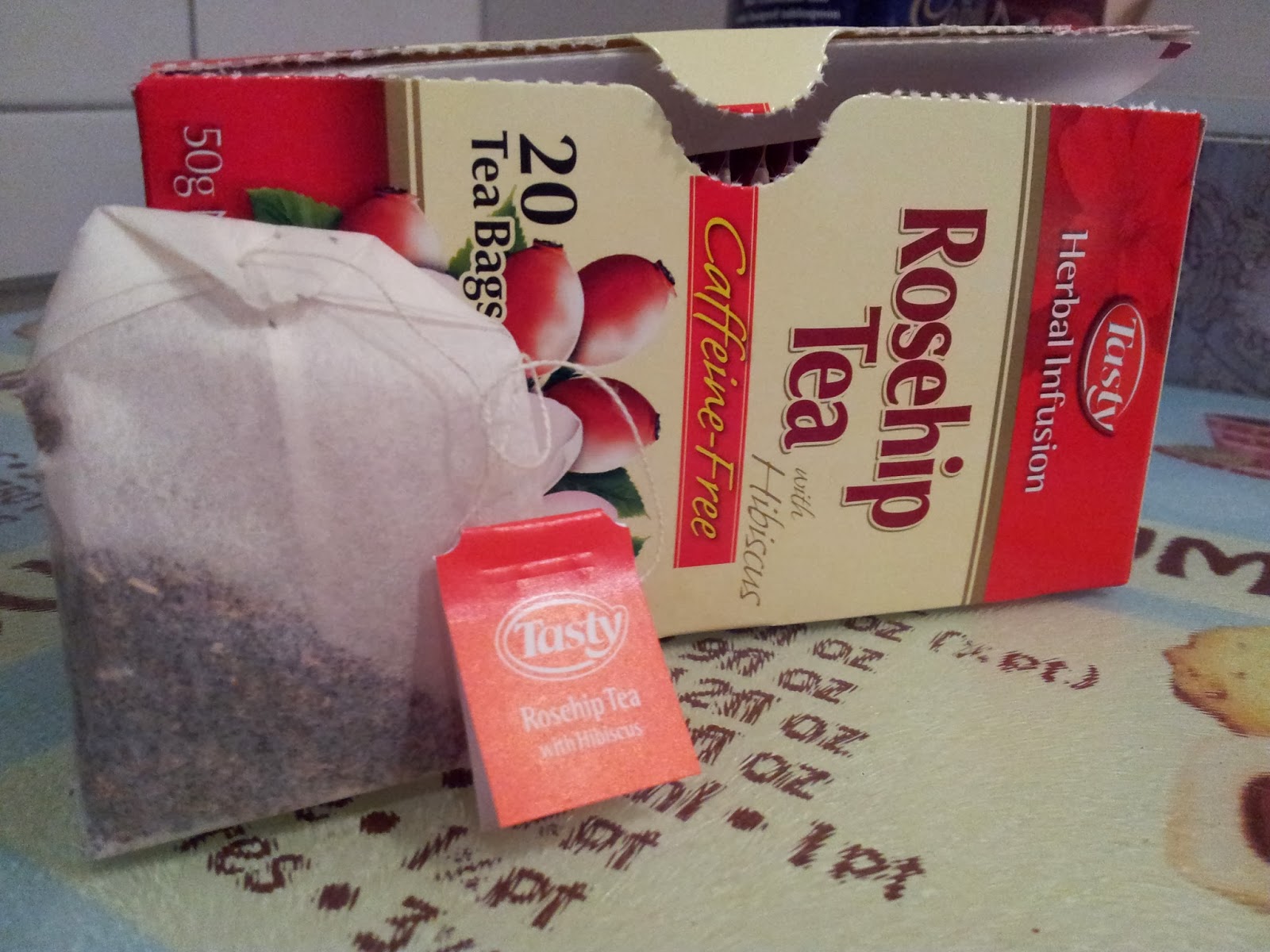 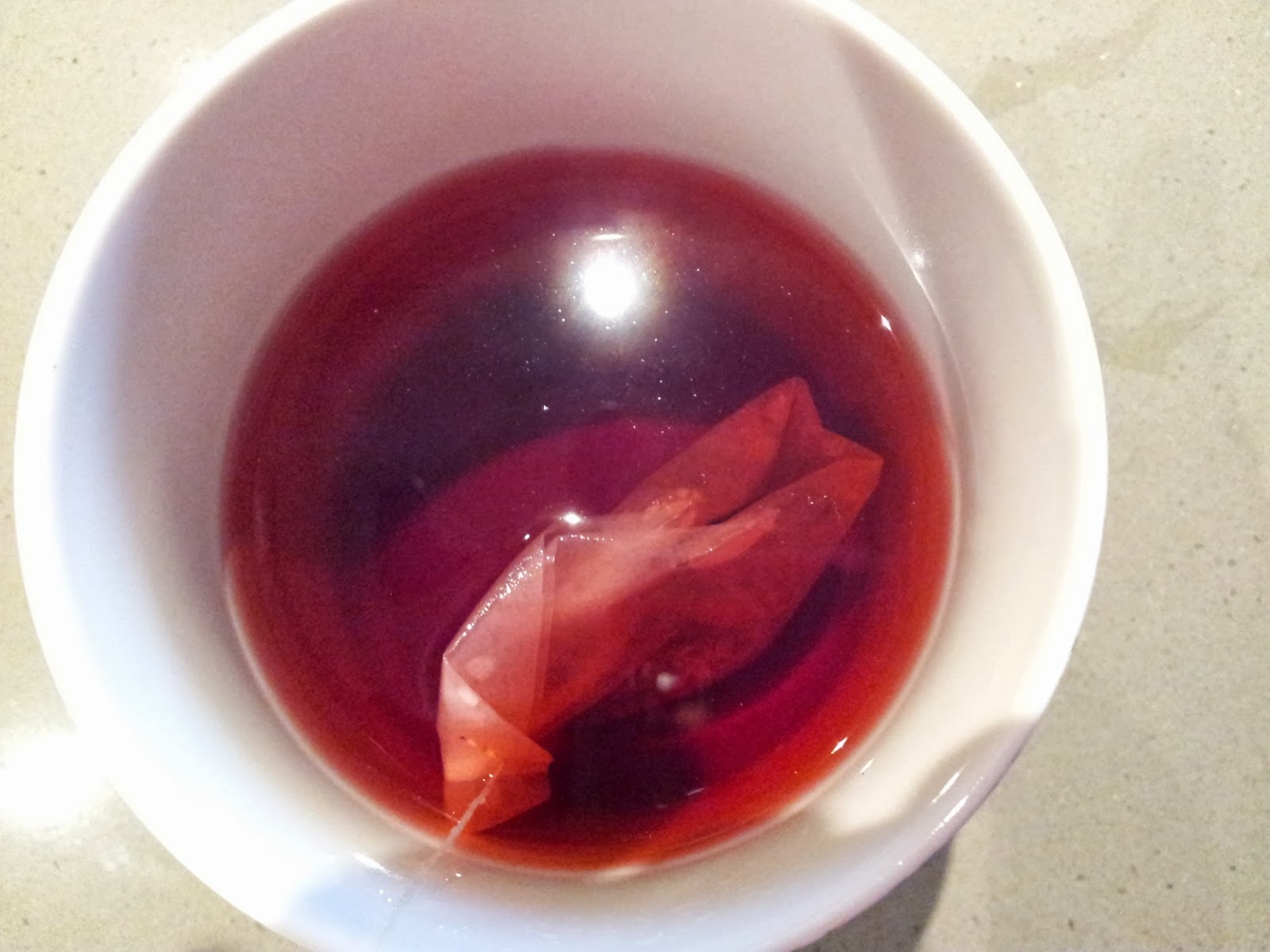 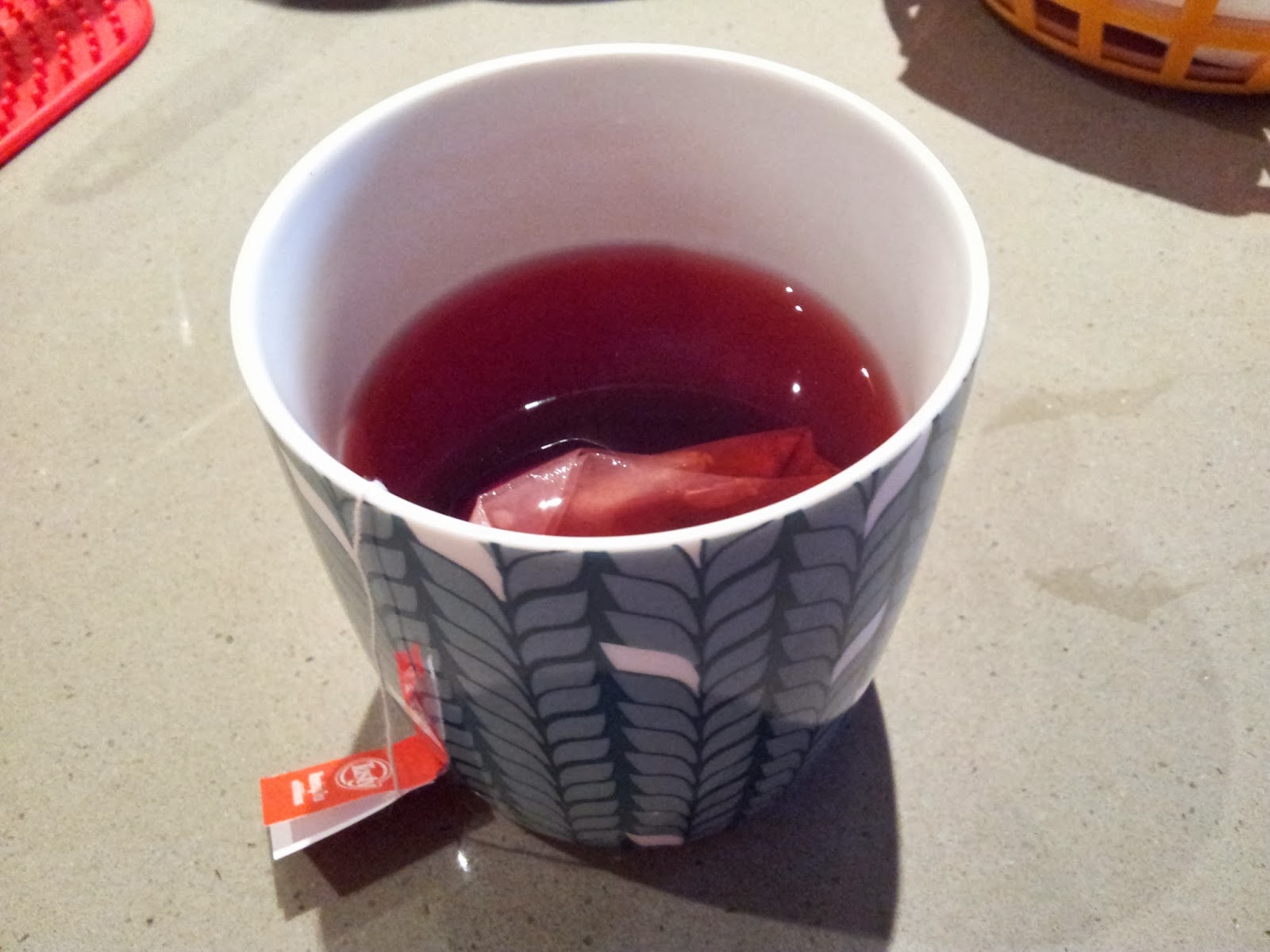 A quick internet search shows that rosehip tea is supposed to have high levels of antioxidants, and is good for infllamation and arthritis. It's also supposed to have amazing healing properties, and to be antibacterial. Oh, and it's caffeine free too, of course.

After brewing, a quick sniff reminded me of just any regular berry tea. And my first few sips were quite pleasant, almost reminiscent of some of the berry teas by Lipton. Then, as I progressed through the cup, the flavours became much more intense, and the sourness started to overwhelm in the bottom third of the mug.

I thought I may have brewed it for too long - I like my teas strong and normally leave the bag in for a good 5 minutes, sometimes more. So, I tried again the next time, and left it for maybe 1-2 minutes. The same thing happened, where the sourness continued to build as you reached the bottom of the mug. It wasn't as sour as the first time I had made it, because I didn't leave it in for that long, and at first, I thought it was sort of refreshing to have something so sour on your tongue to zap you awake.

But time flew by, and I never touched that box of tea again. I'd see it in my pantry, but I would reach for something easier to drink, with equal health benefits.

My verdict? Not my cup of tea, pun completely intended. I think I'll stick to slathering rosehip oil on my face, but leave it off my palate.
Posted by Hui at 1:01 PM 84 comments:

Email ThisBlogThis!Share to TwitterShare to FacebookShare to Pinterest
Labels: tea

First of all, apologies for the very delayed blog post dear readers. Explanation below. Before that though, I'd like to gush about something exciting that my favourite sports site has launched.

Tribesports has launched its own range of sportswear. And it's pretty rockin'.

What was awesome about the range is that pre-launch, they gathered requirements from site users (yours truly included) and then posted up the idea on Kickstarter for funding. User-oriented sportswear cutting out the middle man to bring you very affordable prices. If memory served me right, they reached their funding target in a day or two, and the final number quadrupled the original goal. How insane is that! I guess that shows how much the sporting community really believed in the project (it also helped that the gear looked really, really awesome).

Enough with my silly ramblings, you'd really rather see photos now wouldn't you? 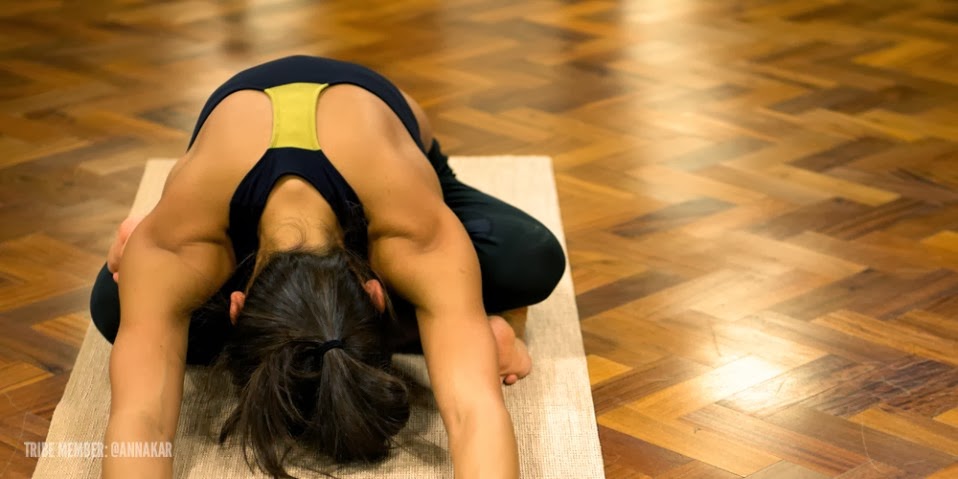 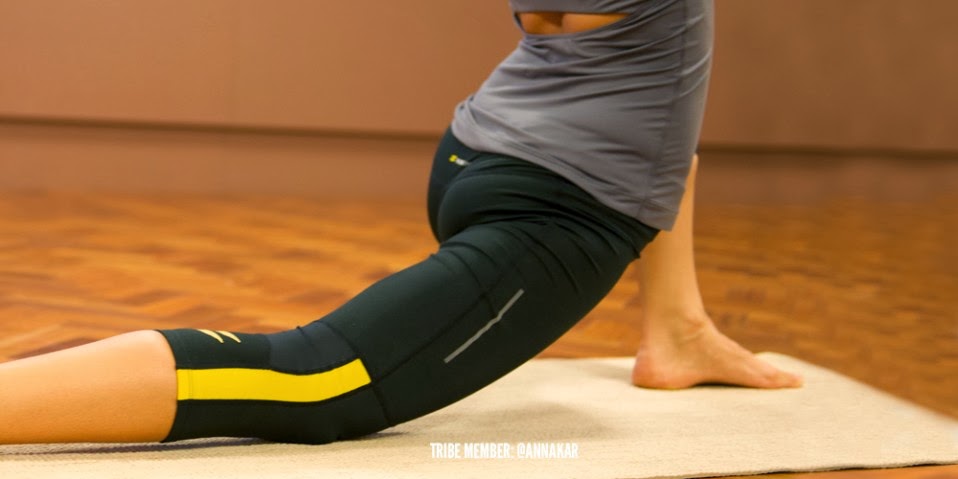 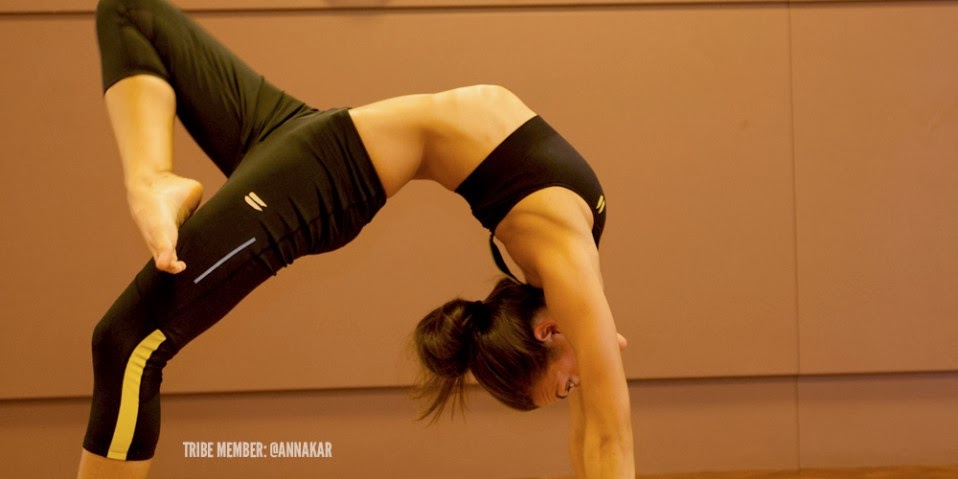 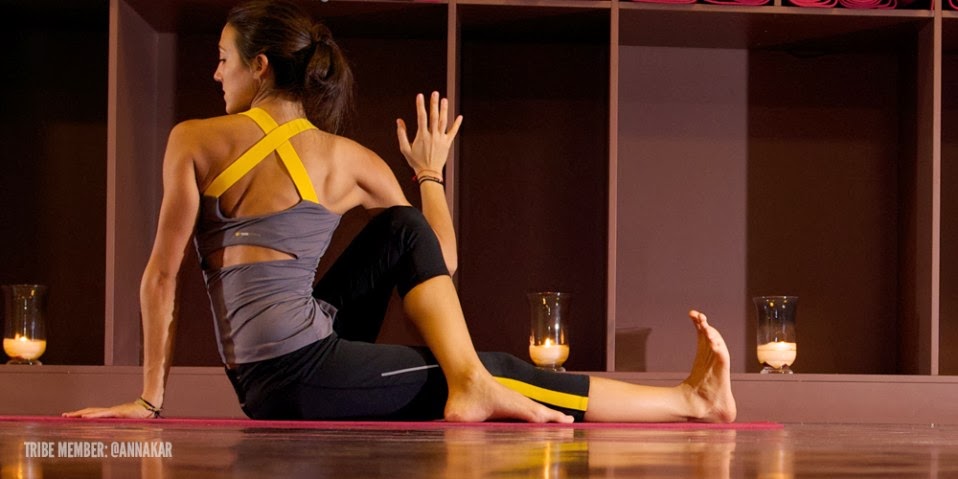 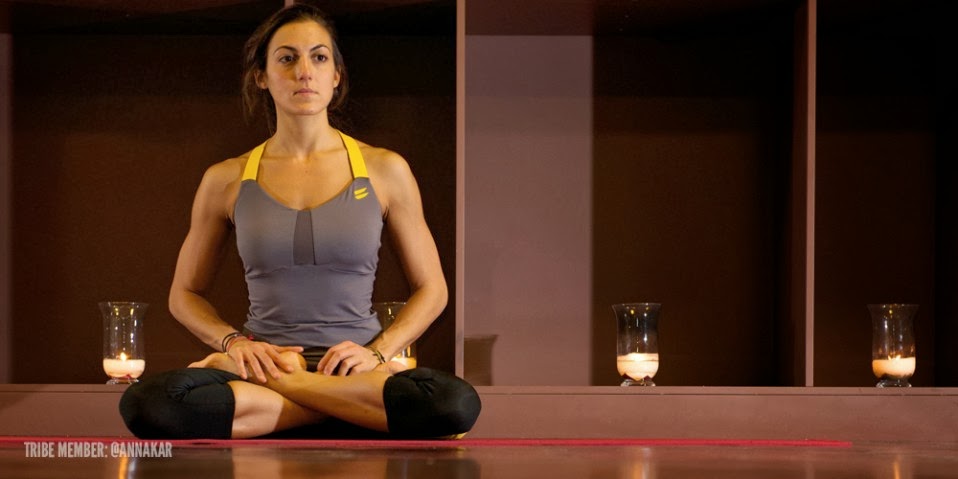 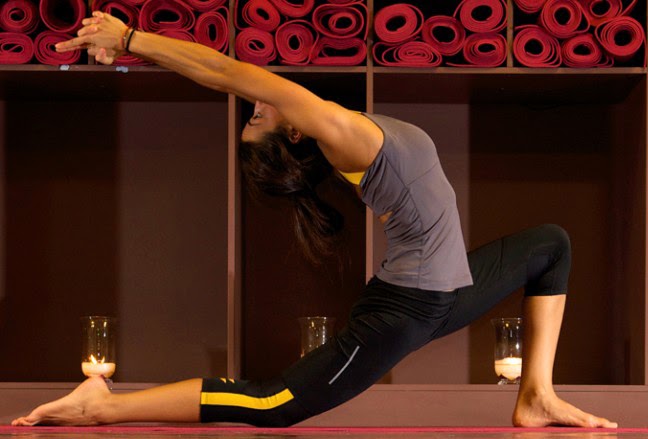 Tribesports also run a monthly social media comp. Post a photo of yourself training in Tribesports gear on Instagram or Twitter with hashtag #OwnYourMarks and you stand to win US$100/£100 store credit.

What are you waiting for? Check out the entire range in the Tribesports shop, and thank me later.

I've been missing from blogosphere for a while. Unfortunately, that happens when you juggle part-time postgraduate studies and full-time work. I also hurt my knee again from running, and this time the injury was quite bad so I had to lay off anything physical for a while. It seems to have healed, but I'm a little hesitant about placing any strain on it. I've done a couple of light jogs with knee support bands, but I'm still so paranoid that it will go back to how it was especially since it's not the first time this has happened. Krill oil seems to help a little, but not by much, and I do love running so I'm a little torn up inside.

In other news, I finally received my Sadie Nardini 21 Day Yoga Body that I pre-ordered way back in August I think. Woohoo, review to come soon. 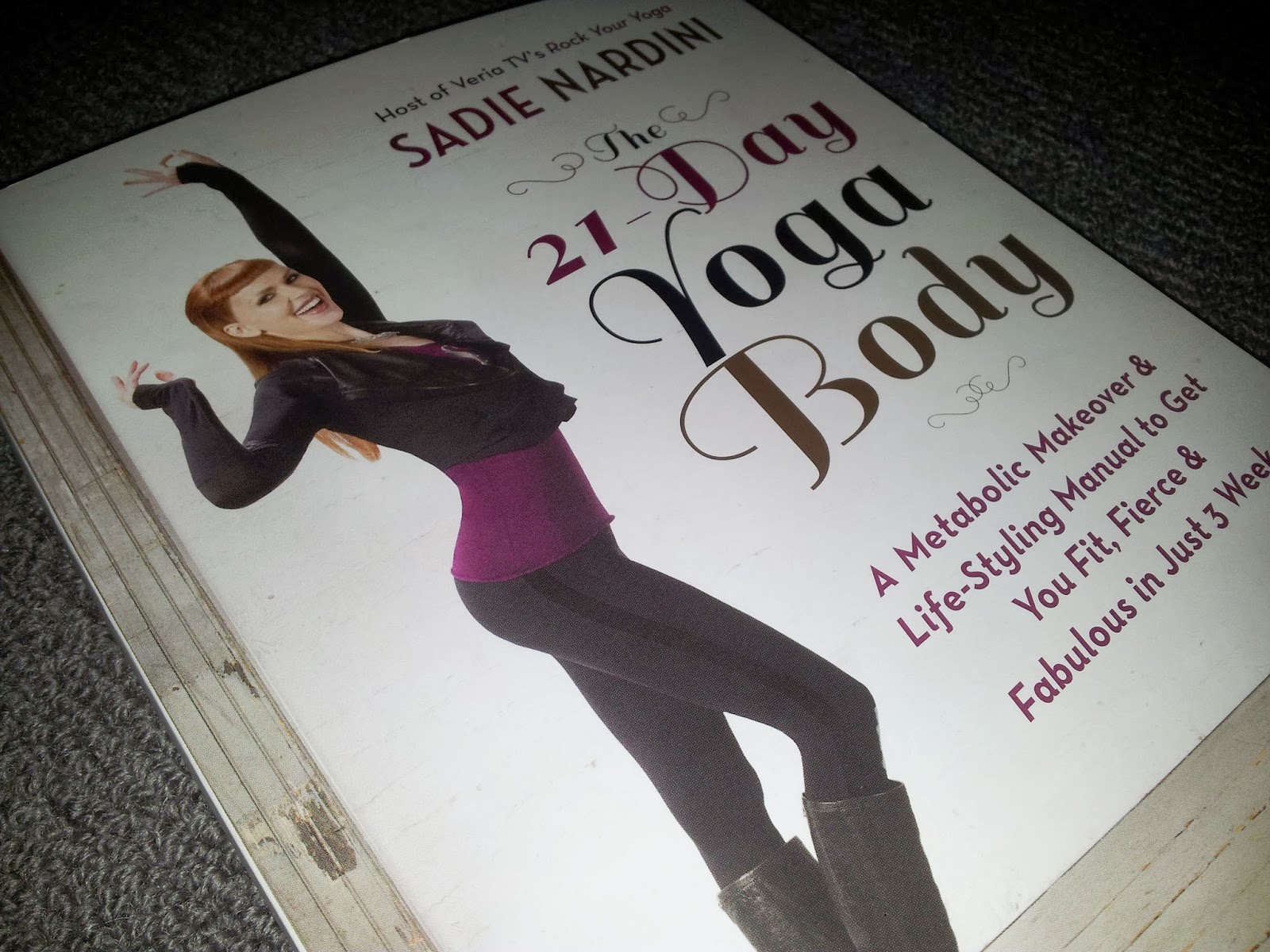 Keep posted, because I promise I will update again soon.
Posted by Hui at 4:44 AM 5 comments:

Hi, I'm Hui! Welcome to my health and lifestyle blog!
I write all about my fitness updates, reviews about anything lifestyle/health-related and I may squeeze in the occasional nerd post. To learn more about me, click here.

We Never Asked for Wings
by Vanessa Diffenbaugh

Swooning: A Classical Music Guide to Life, Love, Lust and Other Follies
by Christopher Lawrence

You're Never Weird on the Internet
by Felicia Day

Better Than Before: Mastering the Habits of Our Everyday Lives
by Gretchen Rubin

The Luminaries
by Eleanor Catton